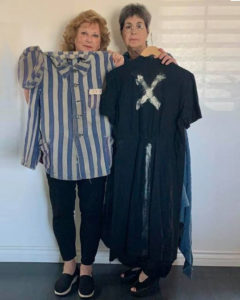 Sandra Scheller is the daughter of holocaust survivors Ruth and Kurt Sax.  She grew up in the South Bay of San Diego.  She’s the author of Try To Remember Never Forget, and creator of the documentary with the same name.  Sandra ‘s TED talk, Keeping Memories Alive, has been used throughout schools as a learning platform for Holocaust education and TED Talk future speakers. She is a volunteer with Ted X in Chula Vista assisting and coaching. Sandra created Art During the Holocaust, an educational panel discussion that is featured at Comic-Con International and San Diego Comic Fest.  She continues to assist other Holocaust educational teams throughout the nation.

Sandra’s past includes performing at the Amargosa Opera House and assisting Marta Becket, working at Cirque Du Soleil, teaching theater arts.  She continues to assist Vilen Golovko of The Flying Cranes, an aerial ballet troupe that performs throughout the world.

RUTH Remember Us The Holocaust was created by Sandra and her mother.  The dress worn by her Grandmother along with other original Holocaust items were passed to Sandra so that she could continue to raise Holocaust awareness through education. Ruth passed away in December 2018 but the legacy and awareness continue through this exhibit.  The exhibit has been recognized by the USC Shoah Foundation as the first Holocaust exhibit throughout San Diego County.  The hope is to create a permanent location with the help of supports and donors wanting to keep holocaust awareness alive.