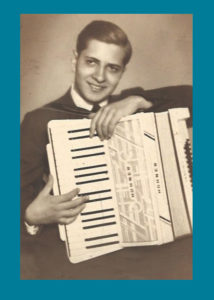 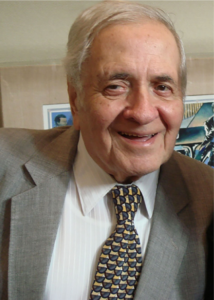 Kurt was only 14 months old when his father passed. His mother, Sophie never remarried. His mother worked to make ends meet and his grandmother and two uncles raised him near his city.

Kurt met Ruth in Czechoslovakia when Ruth was 7 and Kurt was 13 studying for his Bar Mitzvah. They were distant relatives and they enjoyed their summers together.

The family felt that Kurt’s education was of importance but while in high school in 1938, his education was interrupted by the Nazis and school was no longer an option. Visiting distant relatives was dangerous. He knew that he had to get out of the country to even survive so he made emigration a full-time project for himself and others wanting to come to the States. Kurt had a job and had to work beside a Nazi teaching him his work, eventually, Kurt was thrown out of the business. He left Austria on the eve of his 17th birthday to come to the states, but while waiting for his ship to leave from Italy, the war broke out and he was stranded for a few more weeks.

He came to Baltimore for the first 9 months and then moved to South Carolina where he started a small business selling magazines and newspapers. While on a visit to New York, he was given a letter by a relative that Ruth survived the concentration camp. He wrote her a letter in December 1947 and in April 1949 they were married. They never even kissed each other until the day they got married. It took 3 months for Ruth to get her papers to come to the United States. The Russians packed for Ruth making sure that no money was taken out of her country. The two traveled by ship to New York and eventually discovered Paradise California known as San Diego. It wasn’t until 1954 that he purchased his first house with Ruth Sax on 5th Ave in Chula Vista. Yes, they were known as Sax 5th Ave. His mother eventually came to live with the family and while Kurt and Ruth worked, Sophie took care of the children and the home.

The family started a family grocery store which guaranteed his wife that she would never experience starvation again. The family grocery store was very successful with customers such as Archie Moore but Kurt wanted more out of life and wanted to offer the opportunity for Ruth to become a housewife. It was a good decision for them to sell the store because they were held up by gunpoint confirming it was time to leave. His dream was fulfilled in 1966 when he joined the New York Stock exchange.

Kurt was very devoted to numerous temples in San Diego and was one of the founders of Temple Beth Shalom, having served as the president of the board and helped raise funds for a place he loved very much. Kurt loved singing and he took numerous operas and converted them to Hebrew songs for Friday night services.

Kurt and Ruth were married 63 years. They had one long honeymoon.

Kurt and Ruth never went to bed angry and understood forgiveness. They knew they had each other and made the most out of life having much appreciation for everyone.

Kurt always loved a good joke. He returned to his homeland for visits but couldn’t wait to get back to his Chula Vista with Ruthie by his side.