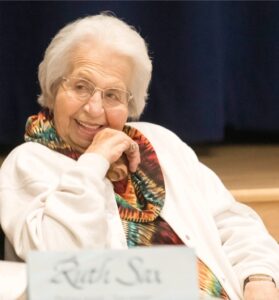 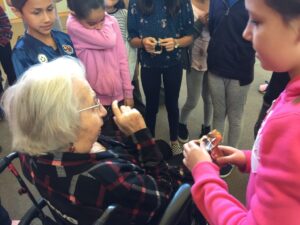 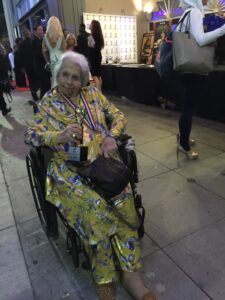 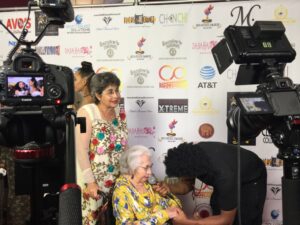 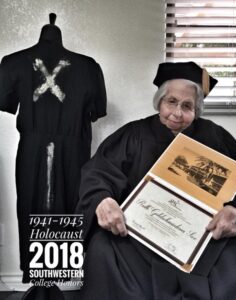 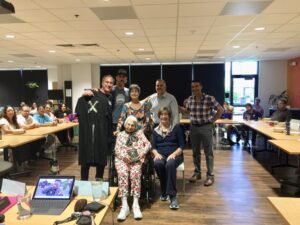 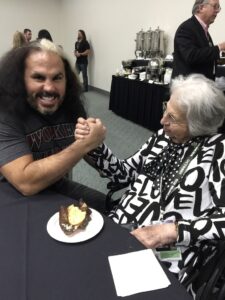 Ruth Goldschmiedova Sax was born on July 6, 1928 in Moravsky Šumperk in the Czech Republic.  As an only child she was very spoiled.  On March 14, 1939 her world came to a drastic change as SS officers invaded the family home turning over everything they saw and taking whatever they wanted.  The Nazis even took the keys to the family car but a non Jewish friend of her father claimed it was his car and was now seen driving her father’s car around the village.

Between 1939-1941 wearing a yellow star on her clothing now marked Ruth. The worst part of the invasion was that Ruth could no longer attend school and her father could not continue his employment.

Ruth remembers the day the orders came that they had to go to the transport station and the trip to who knows where was to begin.  The trip from Brno to Theresienstadt camp should have taken a few hours but it took days.  She was 13 when she entered the camp with her mother and father but was separated from her father.  The next 3 years would be concentration hell for the Goldschmied family. Her mother was a brilliant women and very fast to respond to situations.  This made her the supervisor of the kitchen, which served 3000 holocaust victims.

The Nazis put people to work that were between the ages of 16-35.  Ruth lied about her age, which gave her a job in the children’s garden.  Theresienstadt was the home for Ruth, her father and mother for 3 years.  The Nazis removed Oskar and sent him to Auschwitz.

Eventually Ruth and her mom were sent to Auschwitz but were told that Oskar was killed.  Both Ruth and her mom endured the Angel of Death, Dr. Mengele.   Upon arriving in Auschwitz, both ladies had to remove their clothes and were shaved completely by Jewish men.  It was a shock for Ruth to see her mother and so unrecognizable.  The hardest camp to survive was Auschwitz because there was no work and only being counted while in the nude.  Mother and daughter were now told to board a transport heading for Flossenberg.  As the train approached this extermination camp, luck was on their side that this camp was full and the transport was now heading to a work camp called Oederan.  In April of 1945 they boarded a transport.  The Russians invaded and the roads were bombed.  They were now walking for 2 weeks until they realized they were back in Theresienstadt, which was now a liberation camp.  While in Theresienstadt a gentleman inquired about Ruth and her mom.  As Ruth saw this man she was so shocked to see her uncle only to realize it was her father.  Yes, mother, father and daughter survived.  The Goldschmied’s left their village with 11,000 people only 200 people returned.   They were the only surviving family that returned.

Now that the family was getting resettled after the camps, she looked forward to going back to school.  She was 17 years of age but needed to catch up so they placed her in a class of 12-year-olds.  She had a few teachers that were still Nazis and any chance they had to say nasty things to her, they did.   “ One bad Jew plus one bad Jew equals two bad Jews.  Let me back up from you so that I don’t have to smell a Jew.”

I asked Ruth, “How did you meet Kurt?”  She was on a train and she heard someone speaking English.  She told the woman that she is studying English.  Ruth asked the woman where she was from and the woman replied New York.  Ruth explained that she had a relative in New York.  She continued to explain that the relative was a doctor.  Ruth mentioned the doctor’s name and it turned out that the woman’s doctor was Ruth’s relative.  Ruth begged her if she could send a note with her to the relative and she agreed to take this note.   Within a few months giving this note to the woman, Ruth received a letter from a distant cousin that she had met when she was 6 and he was 13.  The two were writing each other everyday, 1500 letters.  Eventually he asked her to marry her so he returned to Czechoslovakia and they were married.  He brought her to the United States and then traveled across America to San Diego.  They discovered Chula Vista in 1952 and this has been the home of Ruth and Kurt Sax ever since.   Ruth and Kurt were original temple members of the synagogue in Chula Vista and with the help of the New Life Club, an organization that was made up of Holocaust Survivors, they began a new life, where they could be free to think, work and pray the way they wishes.

Eventually Ruth brought her parents over and Kurt brought his mother.

They had 2 children.   Eva and Sandra.

Ruth worked sewing clothes for Ratner’s factory.  Eventually the family had their own grocery store in San Diego guaranteeing Ruth that she would never starve again.  Eventually Kurt worked as a stockbroker riding the trolley from Chula Vista everyday.  A few times he found himself in San Ysidro because he fell asleep on the trolley.

The Sax’s kept a kosher home.  Numerous Jewish families took turn getting meat in Los Angeles and Friday Shabbat dinners were the highlight of the week.

The Sax’s were married for 63 years.  Kurt passed away in May 2012.  This was the first time in Ruth’s life that she would be on her own and being in her 80’s made this even more difficult.  With failed home health care providers, Ruth went to Paradise Village in National City.  Without the pressure of owning a home she found herself organizing activities for other Jewish residence at the Village.  More importantly, Ruth opened up and began speaking to most of the schools in South Bay.  She was at a school at least 2 times a week from elementary-high school and even Southwestern College.  Instructors wanting to know about Ruth’s holocaust experiences were having her do on line webinars.  At least once a month she was speaking on television and featured in numerous magazines and newspapers.  Just last year Ruth received her honorary doctorate degree from Southwestern College, was named a Mother of the Year by Ben Huesso, spoke to numerous border patrol and ICE agencies, helped create, Art During The Holocaust, a panel for Comic-Con, spoke to thousands of students, had her Bat Mitzvah, was woman of Valor for San Diego and had a book about her Try To Remember Never Forget along with a documentary that would be used once Ruth could no longer speak to students.

Ruth passed away suddenly on December 29, 2018.   It was a shock to so many people in community of the South Bay and most government meetings adjourned to Ruth Sax.  Upon her passing she was inducted in the San Diego Women’s Hall of Fame for 2018-2019.

WWE’s Matt Harding said that Ruth Sax the strongest woman ever, even at 90.  Comic-Con labeled her a superhuman without a cape.

Ruth’s legacy:  “Surround yourself with happy people and never let anyone stop you from your dreams and goals.  God created such a beautiful world only some people make it so miserable.”