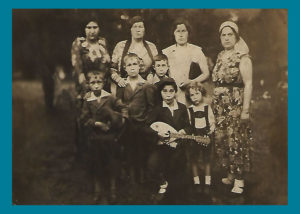 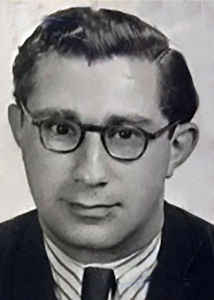 Moniek would be called the Houdini of the Holocaust because he was known for escaping numerous times. He lost an eye in Auschwitz. It was never talked about in the family as to how he lost his eye. He was also known as a number because he was tattooed but never exposed his arm to be documented. He remembers his father being sent to the chambers. After the camps, Moniek went to Berlin and from there he went to New York, then to Los Angeles and discovered Chula Vista. His wife, Musia was born in Russia and immigrated to Tijuana. There he met his future wife. Moniek discovered the dog races, got his haircut and met people in Tijuana. Musia and her mom had a curio shop in Tijuana and this is where they met.

The only two people that survived the holocaust were Moniek and his brother Fred. Fred came to the United States first and then Moniek followed him. His immigration papers now referred to him as Mark Fishauf and this is how he lived out his life in Chula Vista. Mark was a butcher in Los Angeles and then decided to move to Chula Vista owning a grocery store. Ed remembers his father being a hard worker, and his mother was the cashier. The store was open 7 days a week. It was called Mark’s Food Market on the corner of 3rd and K St. After being in the grocery store he opened up Economy Furniture in 1965. It was Mark’s brother in law, Leibi Lipowsky, that helped him established the furniture business and with many blessings, they ran a very successful business.

With Ed being an only child he was so loved by his parents and his beloved Grandmother from his mother’s side. Grandma Golda was an amazing cook and she did spoil “little” Eddie. Having the grandmother take care of Ed made things easier for Mark to grow his business. As Ed explained to me, his father just didn’t bring up the subject of being in the Holocaust. Maybe because Ed was so young, parents of the Holocaust didn’t speak about it for numerous reasons and unfortunately, Ed only knew so much. One thing Ed made clear was that this should never ever happen again. To lose so much of your life and survive this made Ed wonder about those that fought to live. Kids would come up to Mark and wondered about his tattoo and Mark would reply that it was his girlfriend’s phone number. He never covered it up and wasn’t afraid to show it, but he never talked about it. Ed remembers that the tattoo was on top of the arm. Ed had such respect for his father and knew that this was a subject that was not to be discussed. Maybe today Ed wishes that he knew more about his father but is grateful for what he does know. The Fishauf family was a true Kosher home. The meat was purchased in Los Angeles and the meat was soaked in salt in the kitchen. Mr. Fishauf was such a huge donor in keeping Temple Beth Shalom alive. Numerous plaques honored Mr. Fishauf for this giving to his community. One of the things that were difficult in the family was that Ed married someone not Jewish in 1982. This made things very difficult for the entire family because Mr. Fishauf just could not accept that his son would marry someone not Jewish. Mark passed at the young age of 68 very suddenly. Ed knew that he needed to be with his mom so they came to terms and he was able to be with her until she passed a year later in 1990.

This is not an unusual situation for someone non-Jewish to not be accepted in a Jewish family, even more so when it comes to someone who was in the holocaust and survived. Ed’s 2nd son was born on Moniek’s birthday and is also named Mark. His other grandchildren are Nathan, Golda, and Zach.