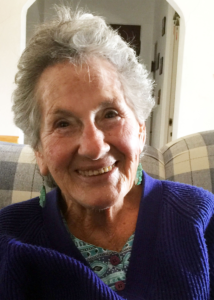 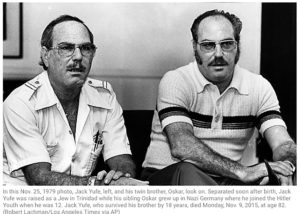 Ona’s father, Barnet Hirsch, was born in Poland, and everyone was immigrating because of being Jewish. He wanted a better life. He immigrated in the ’20s. Ona’s mother, Ida, was born in New York.

By the time World War II started the family had moved to Long Branch New Jersey not far from the ocean. The war was very real for the family because they lived a few miles from an army and submarine station. There was a rumor that a German submarine was sited off the coastline. Ona’s babysitter’s brother was stationed at Pearl Harbor and the facility was bombed on December 7, 1941. This incident was the start of WWII.  The family was aware of discrimination. Ona walked to public school because it was close. She did pass a catholic school and kids in the schoolyard would shout  “Dirty Jew”. Ona walked with her friend who was black and together as they walked to school the same kids commented on her friend as well using the “N” word. She remembered telling her father about the comments from the school and her dear father reminded Ona that everyone is colored. He commented that some of us are pinker than others. It didn’t make a difference. Mind you, this happened almost 80 years ago.

Business was good during wartime. Her father sold shoes and everyone wanted to make sure they always had shoes on their feet. “just in case”.

The family was very orthodox. Growing up, Ona had dreams of being a pioneer in Israel. With Israel being a new country, she wanted to explore this new land. Numerous young Americans felt like Ona. “ It was the thing to do.” Ona took a boat across because planes were too expensive. This was in 1953. Ona met a woman on the boat who had been to Israel before and she was kind enough to introduce Ona to the Kibbutz life. Ma’aleh Hachamisha was the name of the kibbutz. Today it is now a big fancy resort. Ona studied Hebrew in the States so communicating in Israel was easy. She worked with the children at the kibbutz. There, she met her husband to be, Jack Yufe, who had served in the Israeli army. His dad sent him there to “ meet a nice Jewish girl”. Jack had a twin brother, Oskar. Jack and Oskar were born in Trinidad. They were the first Jewish babies born in Trinidad. “ I met Jack at the kibbutz where I worked and studied. He was interesting and very exotic.” Jack’s father had emigrated from Romania to Trinidad because a friend of his told him that business was good in the West Indies.

Jack and Oskar were born on January 16, 1933- the same year that Adolf Hitler came to power in Germany. The marriage between Jack and Oskar’s parents did not last. Jack remained with his father while Oskar went to Germany with his German Catholic mother. Oskar was baptized and took his mother’s family name, Stöhr. His very strict grandmother raised him. At the age of six years old, Oskar was enrolled as a member in the Hitler Youth. This was something that was mandatory for all children in 1936 in Germany. Oskar had to keep his Jewish identity completely secret.  Someone came across his mother’s married name and Oskar was almost taken to a camp. His uncle was in the Gestapo and protected his nephew’s identity.

Both brothers knew of each other but knew few details. In 1954 Jack and Ona traveled to West Germany to finally meet Oskar, his twin. “ There we were stepping off the platform of the train and there was Jack standing next to me and another Jack at the end of the platform wearing the exact same clothes. Oskar knew a little English and Jack knew Yiddish but communication was strained. Ona explained that Oskar joined the Hitler Youth Moment because it was required.

A family friend stayed in touch with Jack’s father and this is how Jack knew where his brother was. Jack contacted his mother and she welcomed him coming to visit.

Imagine, Jack was in the Israeli army and his brother had served in the Nazi Youth Moment in Germany. Even though Jack and Oskar had been separated and lived such different lives, they had many similarities. They both read the last page in a book first; they shared similar clothing styles and even liked the same food. They even walked the same way. They did not talk about politics because of their differences. They both were known for being hot-tempered, demanding and impatient. Oskar died of lung cancer in 1997. Jack did not attend the funeral because he felt that his physical similarity would upset those that were grieving for his brother.

Jack died in 2015 at the age of 82, from stomach cancer. There is a book Indivisible by Two: Lives of Extraordinary Twins (2005) by Nancy Segal, which details the brothers along with numerous documentaries.

While Jack and Ona were in Israel, Jack’s father had settled in San Diego. Around 1955 Ona and Jack eventually came to San Diego and moved to Chula Vista. They had 2 children, Rehova and Devra. Ona was the music teacher at Temple Beth Shalom in Chula Vista. She brought Jewish culture and awareness to the children that attended Sunday school and was loved by everyone. Although Ona was soft-spoken she had much to say and teach.

Who is Ona today?

She loves reading, is a huge Star Trek fan and loves to swim. Ona laughs because she is not male, young and Christian and goes to the Chula Vista YMCA, and loves watching jeopardy and wheel of fortune. Ona also loves watching her daughter, Devra, dance and impersonate Michael Jackson. Her other daughter, Rehova has passed. Rehova had children and Ona is very proud of being a grandmother and great grandmother.

To Ona I say………Live Long and Prosper

“Ona was my music teacher at Temple Beth Shalom. She was the greatest teacher I ever had”, says Sandra Scheller.