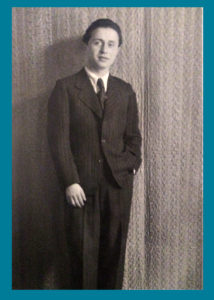 In 1939, Germany attacked Poland.  At that time, Zyndel Wapner was only about 10 years old living in the city of Bialystok.  Two years later, in 1941, the Nazis invaded Bialystok.  As a child, Zyndel frequented the famous Bialystok Temple known as the Great Synagogue. Within one month of the occupation of Bialystok, the Nazi’s burned down the Great Synagogue and its reported that two thousand Jews lost their lives in that fire.

In 1941, at the age of 12, Zyndel and his family along with every Jew in Bialystok had to move into a walled off section of the city which was known as the Bialystok Ghetto. All Jews had a to wear a Yellow Star on their clothes and many of their personal possessions were confiscated.  There was very little food and many passed away from starvation and related illnesses.   Jews between the ages of 15 to 65 were forced to work in factories.

In August of 1943, the Wapner family received orders to relocate and to report to a train station in the Ghetto.  At the station, Zyndel and his father, Aron, were separated from his mother and sister.  That was the last time he saw them.  His mother and sister were killed upon arrival at the Treblinka Death Camp.  The Nazis murdered a million people at Treblinka within a one year period.

Zyndel and his father, Aron were transported to the Majdanek Concentration camp where they stayed for a short time.  Because Zyndel’s father was a tailor, both he and Zyndel were transferred from Majdanek to a work camp in Blizin, Poland.  At the Blizin camp, they worked at a factory making NAZI uniforms.  Sometime between 1943 and 1944, Zyndel’s father died of starvation at the Blizin camp.

Zyndel was subsequently transported from Blizin to the Auschwitz concentration camp in August of 1944. His arm was tattooed with a number (B2676) and at Auschwitz he endured forced labor, physical abuse and a starvation diet. He was 15 years old and at this point had lost both of his parents and his sister.

On November 17, 1944, Zyndel was transferred to Dachau, a concentration camp within Germany. His admission into Dachau was documented by the Nazi’s on a registration form found by the Allies after the war. In 1945, Zyndel, along with other prisoners, was taken from Dachau and marched towards Tyrol, Germany.  On approximately May 1, 1945, he was liberated by Allied forces.

After the war, Zyndel lived in a displaced persons camp in Bergen Belsen, Germany.  He looked for his family but he could not find any other survivors.

Eventually, the International Refugee Organization and a Jewish agency arranged to relocate Zyndel in the United States. In October of 1949, he boarded the U.S.S. Muir to make the trip to the United States. He landed at Ellis Island and from there made his way to Seattle, Washington. In Seattle, he went to school to learn English and proudly became a U.S. citizen.

In 1952, Zyndel was drafted in the U.S. Army and traveled back to Germany to act as an interpreter. He was honorably discharged in 1954, and returned back to Seattle.

Zyndel subsequently met his wife Frida, who was born in Romania. Much of her family had left Romania prior to the start of the war, but some remained and were lost in the Holocaust. Frida grew up in Puebla, Mexico.

Zyndel and Frida married in 1957 and began their lives together in Seattle, where their two children were born. In 1964, they decided to move to Chula Vista to be closer to the rest of the family. At that time, they opened up a fabric store in San Ysidro, that was called San Ysidro Yardage. A few years later, they opened a second fabric store on Third Avenue in Chula Vista, that was called Sid’s Yardage. (By this time Zyndel came to be known as Sid or Sidney.) Sid was known and loved by his customers for the personal service and expertise he provided.

Sid Wapner loved his family, the Jewish Synagogue, and his business. He successfully created a new life in America. Yet he never forgot his past as a holocaust survivor. He had spoken about his experience to school students and in 2009 he made a journey back to Poland to honor the memory of his parents and sister. He was not physically well at the time, but nothing could stop him from making the difficult trip. After 65 years, he returned to Auschwitz and Blizin, and also went to the Treblinka death camp where his mother and sister had been murdered. At Blizin and Treblinka he recited the Mourner’s Kaddish, which is a Jewish prayer to honor the dead.

Zyndel, who lived his life courageously, with a sense of humor and with a persistent determination to survive, passed away on July 19, 2016 after battling heart disease, leukemia and lung cancer.