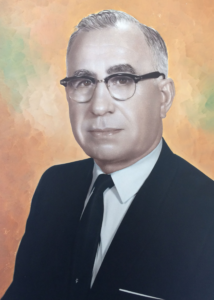 A silver candlestick was found in the burning rubble of his family home by his sister Natalie when the Jewish Warsaw Ghetto was burned down in the 1940s. The flames engulfed more than just tangible items; it included hope, faith, and spirit. Currently, the candlestick stands bright on a dining room shelf displayed in La Jolla, as a constant reminder that this did happen and it can happen again.

In 1969, Max was interviewed for a newspaper article. He shared that during the Polish-Russian war in 1921 he was filled with idealism and patriotism when he volunteered in the Polish army to fight for his country, Poland. He was 16 years old and thought he was doing a fine thing. He soon discovered that there was no freedom or equality for him as a Jew. According to a book written by a relative of the dear friend that left Poland with him, Gil Altschuler, many of the Jewish cadets were subjected to the cruelest of regimes. He reminisced with his daughter, Leah, that he and his fellow soldiers were starving when they came upon a garden in a monastery that was full of ripe onions. When he and his fellow servicemen helped themselves, the priests beat them away with sticks. They were unsympathetic to this crew of starving Jewish soldiers.

Disillusioned, young Max left Poland behind for a place where a future with dignity was possible. He was 17 when he landed in Tampico, Mexico in 1922. He began working at a lumberyard where he earned 3 pesos a week (about $1.50). Not content to wait for long for the success he pushed things along by extending his income through peddling neckties and socks on the streets of Tampico at night. A number of years passed in the challenge of getting ahead in this new land. Then he said a kind of miracle happened. There were lots of Americans in Mexico, and one of them took a liking to him. He had a whole warehouse of sample shoes he couldn’t sell, so he gave them to Max. To anyone else, the miracle might have appeared flawed in that none of the shoes were mates. For Max, it was a matter of practical solutions. He patiently sorted and matched left feet with right and size eights with nothing larger than eight and a half and paired them up. He made them match by dying them all black. When Leah asked him what his customers did when they found out that they weren’t really pairs, he replied with a laugh: “I never went to the same neighborhood twice”. From his shoe bonanza, he accumulated $2,000.00 and joined with a group who had money to invest to become merchants. They sold dry goods, clothing and finally ended up with a solid furniture business. Ultimately, they opened 5 stores. When the group disbanded, he ended up with his own store.

In 1932, he became a Mexican citizen. He had his own business and had already married the year before. His mother Miriam was listed as requesting the honor of the invitees’ presence for his marriage celebration to Eva Golden on his wedding invitation to be held on July 2, 1931.

His business was successful and his first daughter Esther was born in 1933. His second daughter Anita was born in 1935. Everything was going well until 1939 when he became ill with malaria. His illness was complicated by the overuse of quinine which led to liver ailments. Luckily his sister Rose had made her way to the United States and had gotten to know a holistic doctor. After receiving the bad news of a short life expectancy from traditional doctors, Max and his family went to stay with her in Los Angeles so that he could receive life-saving treatment from her doctor, Henry (Hal) Bieler. He remained from 1939 until 1941 until he ran out of money and tired of asking for visas. He returned to Tijuana, Mexico with his family, a little better but still weak and $7.00 in his pocket. Without him at the helm of his business in Tampico, the Tampico furniture store went down the drain.

Concurrently, in 1939, Nazi Germany occupied Poland where Max’s brother Sam, sister Natalie and mother Miriam remained trapped. His sister Rose and various cousins had made their way to the United States. The first casualty was his brother Sam and his family. Natalie and her Polish husband Stephan lived with and protected his mother Miriam in Stephan’s home in Warsaw. Leah recalls hearing a story that the Nazi’s efforts to round up Jews in hiding included circulating flyers advertising ships that provided safe passage to the United States. Although Natalie and Stephan warned Miriam that these flyers were a hoax and a Nazi scheme to round up Jews, they believed that Miriam fell prey to one such flyer. One day when they returned home from an outing, Miriam was gone – never to be heard from again. Natalie and Stephan searched frantically to no avail. They surmised that she may have pursued the false advertisement and therefore became a victim of the holocaust having been discovered and sent to a camp where she perished. Max was traumatized by this. He refused to speak about it and could not even bear to see pictures of his mother which were all hidden away in his home. Leah sensed that he may have held himself partially responsible for not saving her from her death in a concentration camp. This, however, was never verbally verified.

After his mother’s disappearance, and the increased Nazi control of Warsaw, his sister Natalie’s safety became even more precarious. She obtained a false identification registration from the Nazi government with a false name that was not stamped with a “J” identifying her as Jewish. (Leah has a copy of it and there is a cutout area where it appears that Natalie had cut out the swastika – she must have not wanted to see it anymore!). When things got even more dangerous she survived the balance of the Nazi occupation by mostly being hidden within the walls of her husband’s home. That was how she avoided the camps and death. After the war, Max was able to help bring her and Stephan to Mexico.

Meanwhile, while Max continued to get medical treatment across the border, he was able to build a business again from his sickbed in Tijuana. He started by selling blankets he was given on commission with the help of salesmen he hired. Once he accumulated sufficient capital he began selling small appliances, then clothes and then larger appliances and finally furniture. He shared that a second miracle happened during this time period. After about three years of driving his pick-up truck back and forth across the Tijuana port of entry, he spotted a small calf, feet bound and struggling alongside the road. He picked up the small calf and stopped at the border to search for its’ owner. In finding and returning the calf, Max began a friendship that was to give him his second start at success. The man who owned the calf was Manuel Ezroj, even then a millionaire. Ezroj a while later lent him $25,000.00 without anything in the world for security. Max had gone to him with a deal where he thought he could make $20,000.00 and he just gave it to him. A short while later, Max went to Ezroj with two checks, one for $25,000.00 and one for $10,000.00. Max could not forget when Manuel folded the $10,000.00 check-in half and tore it, explaining he did not want interest, that he had lent him money because he was his friend and he wanted to help him. He reminded him that when he needed help he could ask.

With his second start, Max launched into a second business that he knew, furniture and in time, still fighting recurrent bouts of malaria he built a chain of furniture stores in Mexico.
Through his sister Rose’s family petition, he and his family immigrated to and became lawful permanent residents of the United States in 1946. Once settled in the United States, he and Eva had their 3rd daughter Miriam in 1949 and their 4th daughter Leah in 1951. Although Max continued his furniture businesses in Tijuana and Mexicali, once in the US he began Union Furniture stores throughout the San Diego area. He became very successful and ultimately had 6 store locations.

Max credited his survival and successes to the invaluable help he received from his Jewish friends and community and appreciated that Judaism itself struggled for its very existence. For the balance of his life, he dedicated himself not only to his work and family but to the Jewish community and the State of Israel. He was co-founder and president of both the Jewish Community Center in Tijuana and Temple Beth Sholom in Chula Vista. He also was a member of the Rotary in Tijuana. He loved the State of Israel and received recognition for his work by Teddy Kollak, then mayor of Jerusalem as well as General Moishe Dayan. He hosted the Israeli Ambassador Abba Iban at his home and traveled to Israel approximately 25 times before he passed in 1973.